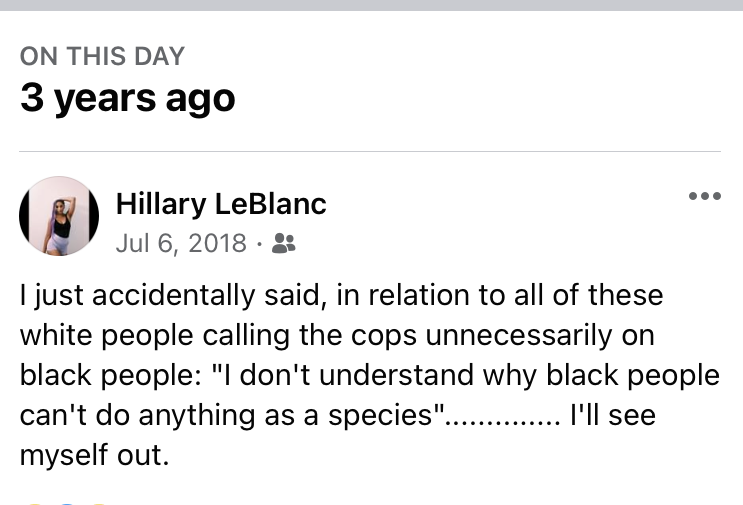 I have talked at length on the podcast and in this blog about the different ways in which I have been racist toward myself or have had unconscious bias against Black people because of the biases around me growing up (my mom, media, pop culture). Something I’ve always done since I was a teen using social media is write down the things I would say or do that I perceived as funny. A lot of the posts centerred around my Blackness. Looking back now, I realize I had some discomfort with this difference I possessed and I often thought joking about it would make everyone else comfortable with me. I know now that you shouldn’t talk down about yourself to make yourself palatable to others.

In two posts that came up recently in my Facebook “memories” I talk about my Blackness. In one I am discussing being asked how I like Canada despite being Canadian and this person saying he “didn’t know” when I said I’ve liked it my whole life”. In the other post I jokingly tell on myself for calling Black people a “species” as if they are animals. What’s interesting is that I am visibly defending my Blackness and joking about it daily. As I’ve mentioned many times before, I never knew how to feel about my own Blackness. I was mixed race, didn’t completely fit in, and wanted everyone to like me. I wanted people to know that even I felt weird about being Black and would slip up by calling Black people a species because “LOL we are different but we aren’t”. I also wanted people to know that asking me where I was from, and those type of unconscious biases were hurtful. I sent mixed signals, because I was also confused about my own feelings toward my race.

I think the unfortunate truth around these posts is that I was spewing back into the world a lot of the rhetoric spoken around me about my and other peoples’ Blackness. Joking about whether or not Black people were a “species”, recalling the time my mother jokingly referred to me as “the help” (the movie was released the year she became wheelchair bound, please don’t cancel my mom), calling myself a “white bisexual” are all examples of an identity crisis fuelled by an unease with my own skin tone. I wanted to be liked more than I wanted to be Black, so I chose to poke fun at the aspect of me I did not like. I simultaneously knew which things spoken to me were inherently racist, and coming from a place of ill will and had enough wherewithal to stand up for myself, but I think in the grand scheme of things those weak attempts at self-esteem in regards to my Blackness were lost by my own ease at tearing myself down in a performative way for others.

Humour can be found in most things. Had I had a Black community to laugh alongside me, that would make these posts a lot more palatable in retrospect. There is such a thing as Black Joy, and comedy in being different in this inherently white society. With the right group of people around me, I could have made these comments without being self-deprecating and lowering my self worth for white people to digest. Blackness, otherness, self-discovery is all apart of growing up and finding your identity. Looking back at these posts now I can see I was trying to figure out how to balance my self worth and my feelings about myself. A lot of these truths can be unlearned in the way Black people are spoken about within communities. If schools taught Blackness in a way that was not through the white lens, the traumatic lens, the slavery lens, I think a lot of the language around Black people would change and the way we speak about ourselves in return would evolve. It’s hard to think kindly of yourself when a large majority of the world is disproportionately advantaged against you. My mom raised me to love myself, and I did love all of my quirks and personality traits, but loving the colour of my skin did not come easily to me. It’s funny to read these Facebook posts where I am clearly confused by my own identity now, when I am much more sure of myself and of my Blackness – something I wish for all POC people.

4:44 of Omar Khadr and the proud boys